by The Marshmallow Ghosts 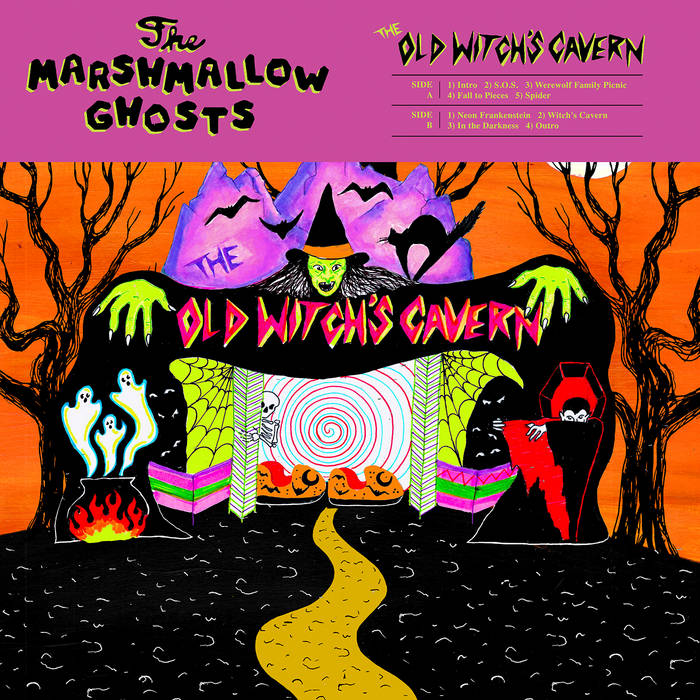 a0stin Such a great album with a cool backstory! Favorite track: Outro.

Waxknack The mine cart ride through the Old Witch's Cavern is just what I need to stoke my Halloween heart after the holiday has passed. #everydayishalloween Favorite track: S.O.S. (featuring The Casket Girls).

For the 11th annual Marshmallow Ghosts Halloween album, we have quite the treat for you! In addition to featuring collaborations from Casket Girls, Kid Dakota, Dreamend, Chris LaMartina and more, this year's release comes with an incredibly bizarre backstory.

Older Georgia natives might remember the legendary haunted attraction, the Old Witch’s Cavern, which operated out of Port Wentworth from May 1972 till its tragic closure in early October 1973. It was an ahead-of-its-time dark ride that dared customers to creep inside a rickety wooden mine cart for a ghastly tour through an underground maze of ghastly ghosts, ghouls, and goblins.

The far-out tourist trap was the brainchild of “Freaky” Fred Crimpens, a New Jersey hippie transplant who inherited the property from his great uncle and vowed to open the most bizarre haunted house ever assembled. With its psychedelic neon Frankenstein laboratory, werewolf family picnic, and final descent into a red hot hell-themed dungeon filled with horned mannequins and ear-piercing screams, it was an unforgettable assault on the senses which ultimately lead local church groups to protest its place in the tiny community.

When a devastating fire burnt the attraction to the ground, Crimpens believed arson was the origin especially after he received dozens of death threats from conservative townsfolk. Not long after his insurance claim was denied, Crimpens drowned in the Savannah River. Police ruled the death a suicide and the Old Witch’s Cavern was closed indefinitely.

Now long gone, only a few pictures of this ambitious attraction still exist, but what we do have is the unbelievably strange recordings that played during the tour. The voiceover artist who played the Old Witch, local Savannah radio DJ, Christine Peterson, was given the master copies after Crimpen’s unfortunate demise and her granddaughter sold them to us in the summer of 2018. The fact they still play feels quite supernatural, indeed.

For this year’s Marshmallow Ghosts record, we present a real treat. Fred Crimpens may be dead, but he’s here in spirit, to collaborate with Graveface Records from beyond the grave for an absurdly evil album that’s perfect for an October evening.